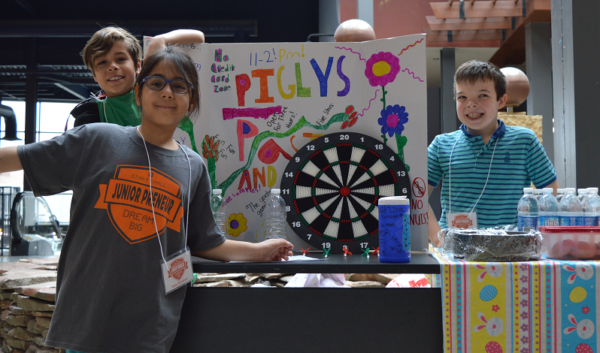 Juniorpreneur Camp was a lot of fun, and we’re so impressed by the remarkable talent that walked through our doors for this year’s Juniorpreneur March Break, March 12-16.

We had a full house– 20 young budding entrepreneurs ages 8-14 years. These bright young campers grouped together as teams and worked hard to develop business ideas over the week. Finally, on Thursday, March 15 they all got to cash-in on their product development and customer-savvy skills and bring their products to market at the Bayers Road Business Centre’s “Juniorpreneur Marketplace.”

The two girls behind Candy Bombs thought it would be a unique idea to sell homemade bath bombs and elaborate, colourful candy kabobs. Their products may have been higher priced than other team’s, but their profits made their work worthwhile!

The team behind The Wam Parlor packed a *wam* with a wonderful variety of products to sell, including used books, baked goods, and delicious homemade bubble tea.

The four juniorpreneurs from Mr. Candy chose to invest in a popcorn machine– and they chose wisely! Their purchasing costs were  covered by popcorn sales  alone! And while the popcorn kinda stole the show, they also sold assorted candy  bags and popsicles.

Our one solo ‘preneur sold out of all her brownies, cupcakes and adorably sweet homemade earrings! The items and her fun-filled dance routine were a huge hit among staff working in Bayers Road Centre.

Four active campers set up the ball toss and magnetic dart games with prizes to attract passers-by, and while they had these new customer’s attention, they managed to sell them delicious homemade treats as well.

The group of three boys took a different approach from all the others by deciding to sell healthy “green” snacks such as apple cider drinks and homemade sandwiches and salads. (It was great to have the healthy alternative!)

Cashing in on a need for more drink items (other than the Wam Parlors’ bubble teas, of course). A&L sold fruit smoothies along with other delicious homemade snacks such as brownies and crackers.

Our March Break marketplace made a combined total of over $1,400 in gross profits, while two of our seven teams donated a percentage to the IWK and the SPCA charities.

Thank you to all of CEED staff, parents, campers and volunteers who came together to make this Juniorpreneur Camp such a success! A special thank you to our co-op students who were here for the semester: Douglas Wetmore who organized plenty of the camp’s logistics, and Laura Hines who organized the camp’s public relations. 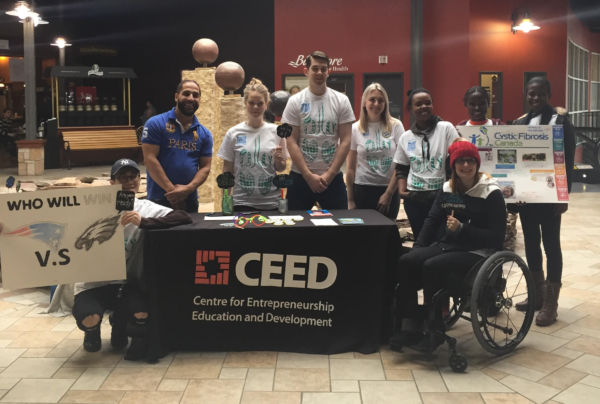 A big congratulations to our partners at Mount Saint Vincent University and all participants of the 2018 Social Enterprise for a Day (SE4D), finishing as a huge success this year with over $2200 raised towards Cystic Fibrosis Canada Atlantic Region. Here at CEED, Small Business Advisor RJ DeCoste and Education Facilitator Manus Farmer were proud to have been given the chance to work with three teams, supporting their hard work throughout their ventures.

RJ had worked with his two teams: the self-named “A-Team” and “MSVU Cupid’s”. A-Team had created gift boxes full of chocolates and candies which they sold at each end of the Halifax Ferry Terminals. Their team found many people interested in donating to the cause, without even purchasing their product, and were able to raise $195.

“MSVU Cupid’s” capitalized on the upcoming Valentine’s Day by selling Roses with Chocolates and Bracelets around the Mount Saint Vincent University campus. Not only did they come in first place, but they also set a new record for funds raised by a single team at SE4D earning $673!

Manus worked with a team that capitalized on the upcoming Superbowl by encouraging people to make predictions on the winning team and encourage these sports enthusiasts to donate to CF Canada at the same time. The group kept track of the prediction stats and were able to raise up $170.

Congratulations and thanks to all the entrepreneurs who were able to come together and raise so much for such a great cause!

How to Find Business Success in the First Two Years 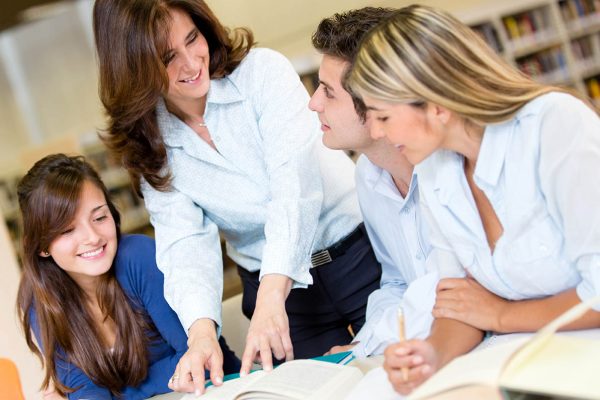 One of the most surprising business-related statistics is the fact that 80% of entrepreneurs fail within the first two years. As somebody who has been part of a company from its conception, I have been through a tumultuous journey, and on this journey I have become wiser and more receptive to the challenges that have been thrown at me. Here are some of the pearls of wisdom I can offer to ensure that your business has a greater chance of success within the first two most difficult years…

Keep track of everything:

Every single payment, measurement, conversation and email sent needs to be kept track of and well documented. Organization within a workplace can be the key to its success. If you create written systems for everything, then you will most certainly see the benefit. A great way to maintain a level of consistency and organization is to make sure that you ingrain these systems into every fibre of your business and train your employees accordingly. Be sure to make your daily decisions and set your targets and expectations based on the data you collect, whether that is based on figures, inquiries or anything else related to your industry. Although this may seem like a really obvious thing to do, as a business owner there are a million tasks that can easily shift your focus and making decisions based on advice or hunches can often be tempting.

A great business owner will tell you that your employees make your business. Their success is your company’s success, and their failures are your company’s failures. Only welcome people through the door if they share the same passion as yourself. The hiring process is an excellent time to gauge the strengths and weaknesses of a person, so be sure to really get a feel for how the person thinks and feels before bringing them on board – however tempting it may be, never ever fall into the trap of making quick hires!

If you recognize the strengths of your employees and delegate effectively, then success will follow. Don’t fall into the trap of micromanagement as this can demotivate your employees and distract you from other tasks within the business. Use incentive-based reward systems to motivate and inspire your employees and ensure that you have proper training procedures in place to get maximum results.

A successful business owner is versatile and receptive to change. Never marry yourself to your business plan. As markets change, industries change and in order to stay relevant, you must change with them. Don’t let your ego get in the way of your businesses success, if your plan isn’t working then take a step back and explore other avenues to take. Remember, that every day is an opportunity to learn more about your industry and about how the world works, so be receptive to change and open to advice.

Alice Porter is a business writer for Roger Hannah, she is passionate about sharing her knowledge with like-minded professionals and new business owners. 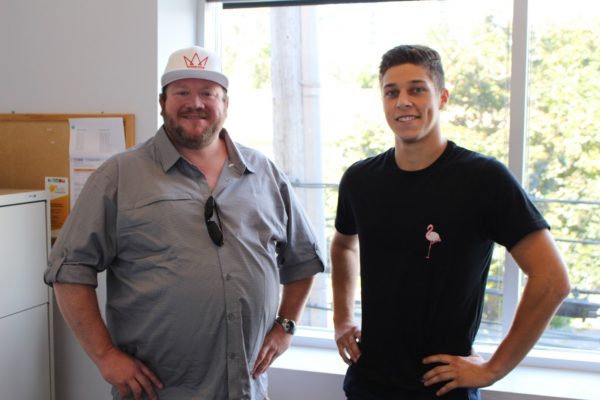 Although many small business owners strive to keep the “little guy” in mind, Large Lad Clothing creator, James Weir, is trying to do just the opposite.

As a bigger guy, James Weir has had his share of challenges trying to find stylish clothes that fit. He recalls experiencing a shopping trip in late 2014 when he yet again failed to find decent wardrobe options, as the moment when decided to create Large Lad Clothing. With the encouragement of his wife, and the Self Employment Benefits Program at CEED, he went on to establish a quality clothing company, tailored exclusively to larger men.

Men who share Weir’s struggle of finding stylish clothes need to look no further. Large Lad’s Clothing is a high quality, breathable and vented clothing line aimed at helping the larger man feel his best every day. His wide selection of apparel has amassed many followers which he refers to as a brotherhood called: “The Tribe”. Weir’s concept for the brotherhood aims to help create his brand power contribute to the growing movement of men’s’ body positivity.

Having only opened his business in January 2016, Weir has been very pleased with the response thus far. Although found primarily online, his clothing is available for purchase in-store from Truro, NS all the way to Austin, TX.

Large Lad Clothing has received many major endorsements from ambassadors who proudly promote Weir’s line. Affiliations with DJ IV, Plus Model Mag, DJ Sneak, and The Chubstr Blog as well as many other influencers, magazines and blogs have been incredible additions to Weir’s success story.

In spite of having faced many hardships along his journey, James Weir has overcome plenty of adversity and he continues to “keep pushing forward”. He plans take to advantage of every opportunity he is given to share his business’ passion and to keep learning from his mistakes. Weir truly exhibits what it means to be an ambitious entrepreneur, and he embodies the resilience it takes to be successful. As he puts it, he plans to “Go hard to the end, bitter or sweet” but with his great spirit, it will surely be sweet.